Ryan and I got a firsthand look at the revival of popular interest in John Adams when we tried to schedule a visit to Adams National Historical Park in Quincy, MA.  We’d planned on an afternoon visit, but since tour tickets are limited and on a first-come, first-served basis we decided to call first.  It’s a good thing we did, because every single tour for the day was already full, and we’d called not long after lunch.  Capacity crowds aren’t unusual at the site.  From what the staff told me, ANHP has been doing a brisk business in ticket sales for some time, ever since David McCullough and HBO made John Adams fun again.

Or perhaps I should say they introduced us to a man who had always been fun.   Adams had such a vivid personality, and expressed that personality so fully in his writing, that he’s the most flesh-and-blood of all the Revolutionary demigods.  When you read John Adams, there’s no Washingtonian marble exterior to crack, no haze of Jeffersonian contradiction to penetrate.  He jumps right down off his pedestal, pokes his finger in your chest, and spouts whatever’s on his mind.  Irritating but engaging, stubborn but fiercely loyal and determined, he has all the makings of a great TV character.  No wonder people flock to the places he lived.

Anyway, we picked another day to visit and headed out early.  It was worth the effort, because there aren’t many places where you can see two presidential birthplaces for the price of one, just as there aren’t many historic sites interpreted as well as this one.

As of this writing, the visitor center is located at the Presidents Place Galleria, a sort of office/retail building in Quincy.  I think ANHP is in the process of moving to new digs, but until then you won’t find much in the way of an exhibit.  What you will find is an excellent film narrated by Laura Linney, which offers an overview of four generations of Adams family history, from the American Revolution all the way to the Gilded Age of Henry and Brooks Adams.

The park has its own trolley service to conduct visitors to the three historic homes.  The first two homes are right next to each other, both of them constructed in the distinctive New England “salt-box” style.  The first is the house where John Adams was born in 1735.  (Tourist with sailor hat not included.) 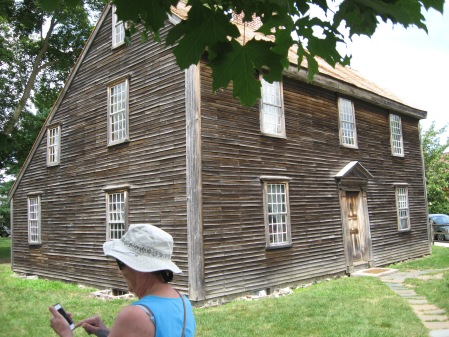 Just across the lawn sits the house where John and Abigail set up housekeeping and where John started his law practice, made a political name for himself as America and England headed toward war, and wrote the Massachusetts Constitution.  Their son John Quincy was born here, too, so you’ve got two presidential birthplaces less than eighty feet apart. 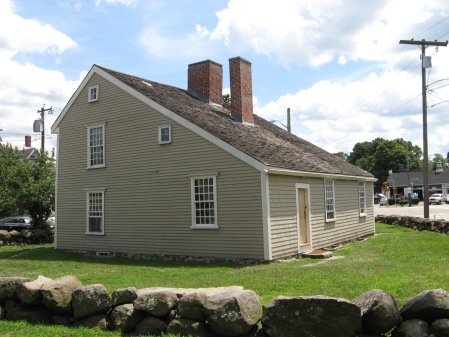 The third home, and the focus of the tour, reflects the elevated stature the Adamses enjoyed due to John’s public service in the Revolution.  Peacefield, or the “Old House,” is the home John and Abigail bought while overseas, and served as the family seat until 1927.

The house still has many original furnishings, and each room boasts a mixture of items from all four famous generations of the Adams family.  Some of these items are priceless.  I was especially excited to see the desk where John Adams wrote the letter that mended his relationship with Thomas Jefferson, initiating one of the most remarkable bodies of correspondence in American history.

Some of ANHP’s most valuable assets aren’t in the collection at all, but walking around in uniform.  The guides are some of the best interpreters working at any historic site I’ve ever visited; their knowledge is encyclopedic and their delivery is polished and engaging.  I’d venture to say that our tour of Peacefield was probably the finest historic house tour I’ve ever taken.  The ranger was in total command of his subject matter and his audience.  It’s no small thing to master the history of an entire family when the family in question produced two presidents, some accomplished diplomats, and one of the country’s most distinguished men of letters.

There are a couple of other neat Adams-related things to see in Quincy.  A nice statue of Abigail and a young John Quincy stands not far from the visitor center.

And you’ll definitely want to set aside some time for a tour of United First Parish Church, which is just across the street. Established as a Puritan church in the 1630’s, it became a Unitarian congregation in the 1700’s.  The current building, with its columned portico and a sanctuary with a beautifully carved ceiling, dates from 1828.  John, Abigail, John Quincy, and Louisa Catherine Adams are all laid to rest in the crypt.

Our tour guide took us inside the burial chamber, a small, stone room with a low ceiling whitewashed walls.  It’s about as intimate an experience with history as you can have.  I should’ve taken a picture, but it just didn’t seem right to dig my camera out with two sets of presidents and first ladies lying there.