Appalachia and the atom bomb

Lots of people know that the enriched uranium in “Little Boy,” the atomic bomb dropped on Hiroshima seventy years ago, came from the Y-12 plant at Oak Ridge here in East Tennessee.  At the very least, they know that Oak Ridge was involved somehow in the Manhattan Project.  But while plenty of people know of East Tennessee’s connection to the atomic bombing, I suspect they don’t really “get” it.  “Appalachia” connotes backwardness; people think of the mountains as a place of log cabins and hardscrabble farms, not the advent of the atomic age.

Even here in East Tennessee, it seems to me that we tend to see Oak Ridge’s wartime experience as somehow set apart from the rest of our history, as a kind of singular, brief moment in time when we suddenly became relevant before slipping back out of the mainstream.  Because we’ve let ourselves be convinced of our isolation and exceptionalism, we don’t really “own” this instance that proves how wrong those notions of isolation and exceptionalism are.  But Oak Ridge’s history, and thus the history of the atomic bomb and the world it made and unmade, is a part of Appalachian history.

Part of the job of Appalachian historians, I think, is to figure out how to integrate these aspects of the region’s past that don’t fit people’s expectations into a more comprehensive narrative.  Maybe this would help erode some of the simplistic stereotypes that continue to define popular notions of what the region is, and what it isn’t.  East Tennessee’s role in the creation of the atomic bomb might be a good entry point for this sort of thing, but that won’t happen as long as we see it as some singular development in the region’s history that has little to do with the rest of it.

With that out of the way, here are some links in recognition of what happened seventy years ago today. 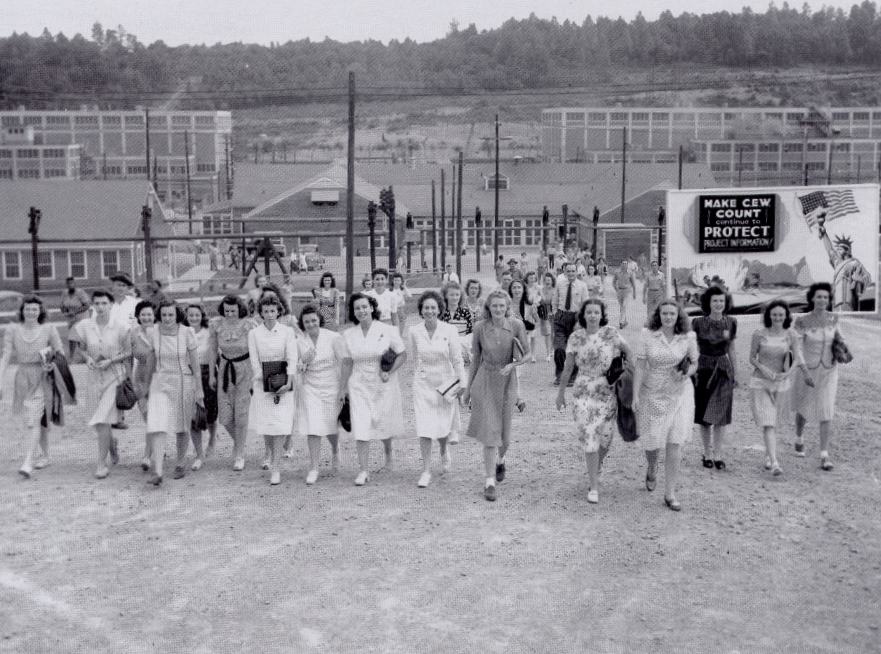 Shift change at Y-12 in 1945. Department of Energy via Wikimedia Commons