In the summer of 1909, just after vacating the White House, Theodore Roosevelt killed a lion in Kenya as part of a collecting expedition for the Smithsonian.  Now the mounted cat is going back on exhibit at the National Museum of Natural History after spending twenty years in mothballs.  Here’s Sarah Kaplan’s fascinating piece at The Washington Post:

The past century has taken a toll on the majestic creature. The lion’s tawny fur is crushed in places, and his rumpled mane gives him the appearance of having bed head. A portion of his ear is clipped, chunks of fur are missing, and his glass eyes have gone foggy with age.

Conservator Ron Harvey surveyed the mount, assessing the damage, deciding what to repair and what to leave as is.

“I want him to look his best,” he explained. “But it is 100 years old. I want to maintain that sense of history too.”

The job of a natural history conservator goes far beyond simple aesthetics. Harvey must maintain the specimen’s scientific usefulness, ensuring that it can be studied by future generations. He also wants to preserve it as a historical artifact — an object that can tell us about our past and its own. When museum visitors look at this mount in six months, Harvey hopes they’ll get a sense of how it got to the museum, what it meant when they arrived, what it stills mean today.

“What story did this lion and Roosevelt want to tell us?” Harvey wondered. That’s what he aims to conserve.…

After consulting with museum conservation specialist Cathy Hawks, he decided to leave the lion’s glass eyes — which are cloudy and crizzled from a phenomenon called glass disease — as they are. They’re historic artifacts too, after all, and they’re suggestive of the lion’s old age and impressive backstory. On top of which, it would probably cause more damage to try to take them out.

“What we’re trying to do in conservation is preserve and extend the life of . . . this body that has not been sapped of all its knowledge,” Harvey said.

He noted that the specimen has been cited in scientific journal articles as recently as 2010, and that scientists are developing new tools for research all the time. There may be other stories — about lion biology, East African ecosystems, 20th century taxidermy methods — buried inside this specimen, waiting for someone with the right question and the right tools to answer it. 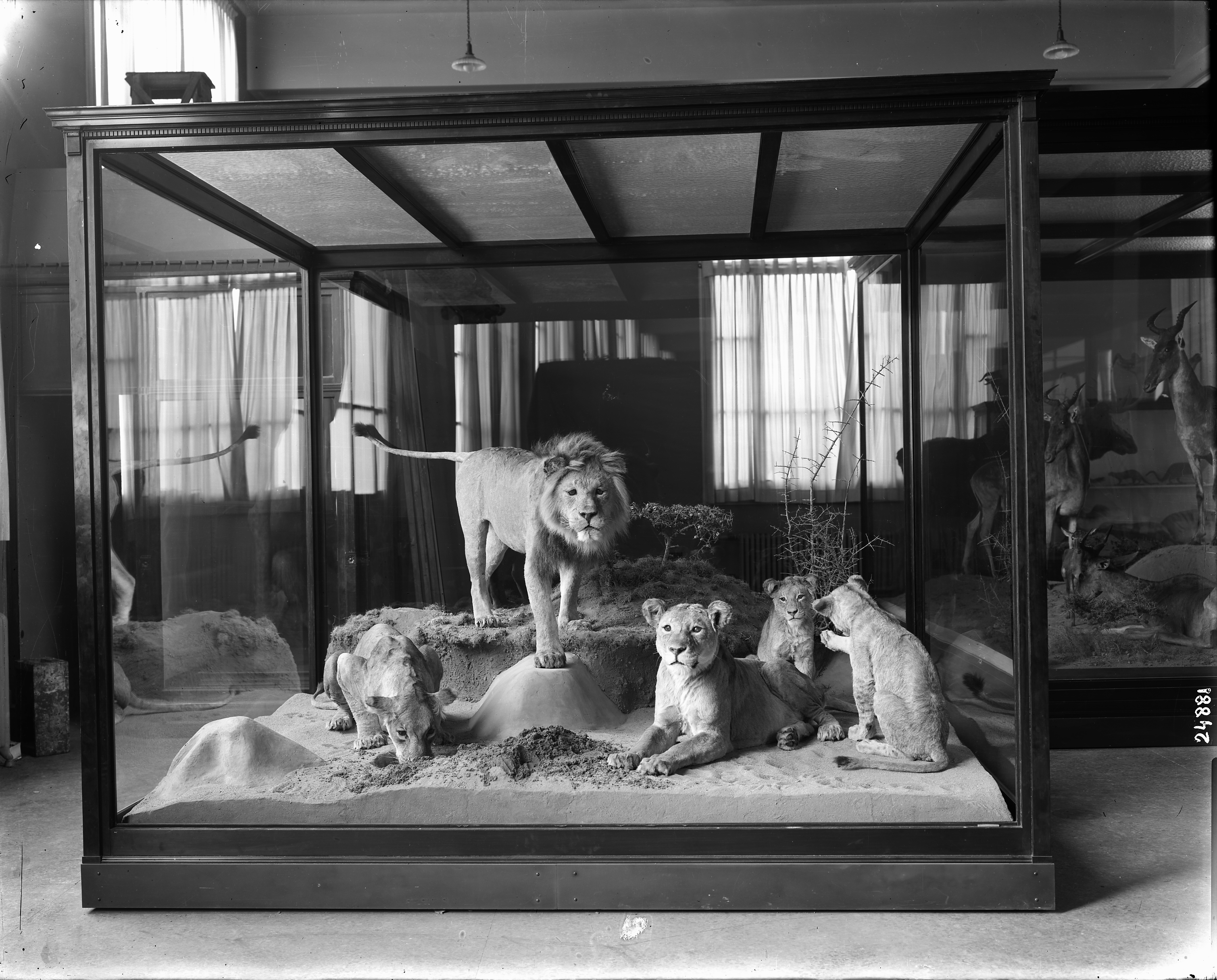 That’s one of the things that makes a visit to venerable old natural history museums so special.  As I’ve said before, a stroll through the fossil galleries of the American Museum of Natural History is almost like a tour of milestones in the history of vertebrate paleontology in the late nineteenth and twentieth centuries.  Seeing any real dinosaur fossil is a treat, but at the AMNH you’re also seeing the life’s work of legendary figures like Barnum Brown, Henry F. Osborn, Charles H. Sternberg, and Roy Chapman Andrews.  You’re standing in the presence of giants in a dual sense, both the remains of long-dead creatures and the ghosts of those who brought them to light.

If you’re planning a trip to the AMNH, I heartily recommend reading Douglas Preston’s Dinosaurs in the Attic: An Excursion into the American Museum of Natural History before your visit.  It’s an engrossing reminder that natural history and human history are intertwined, and that museums house stories as well as specimens.  Thousands of stories, millions of stories—stories behind every pair of glass eyes, mounted on every metal armature, locked away in every drawer.