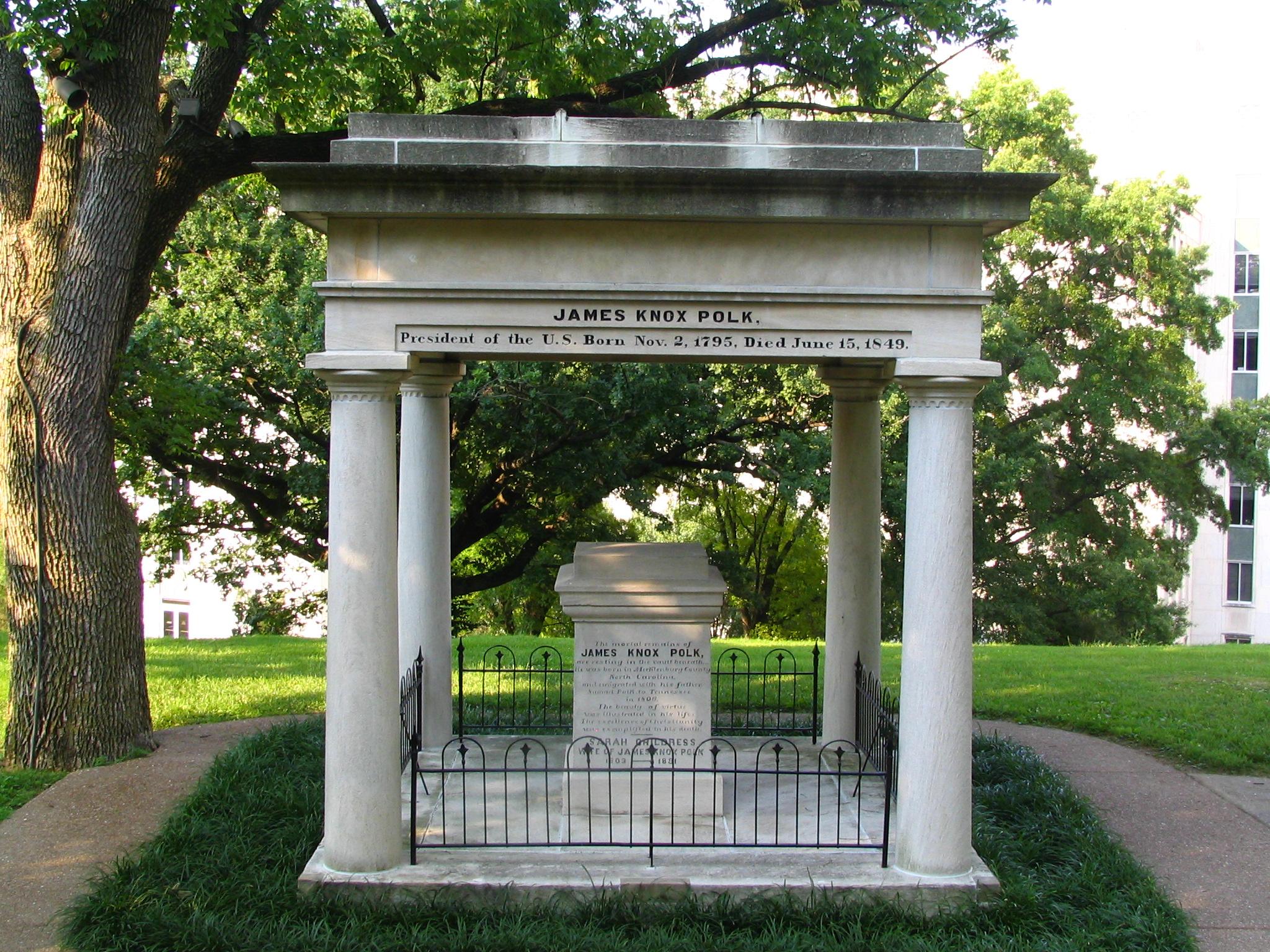 It’s not often that Young Hickory has a big news week, but a couple of developments have quite a few people talking about James K. Polk lately.

First up: his corpse might be taking up new quarters.  It wouldn’t be the first time it’s happened.  Like a lot of other historical figures, Polk’s mortal coil has had quite the active career.

He died of cholera at Polk Place, his Nashville home near the site of the present Tennessee State Capitol, just three months after leaving office.  Despite his request to be laid to rest there, he was initially buried in a cemetery on the outskirts of the city as demanded by law for cholera victims.  Shortly thereafter his remains went back to Polk Place for interment, where they stayed for more than forty years.  But in 1893, the bodies of Polk and his wife got relocated to the Capitol grounds and laid to rest beneath a monument designed by the same architect responsible for the Capitol building itself.  It wasn’t where the former president wanted to spend the afterlife, but it was close—just a short distance from Polk Place, which got demolished in 1900.

There the matter (and Polk) rested until a current proposal that state lawmakers are considering, which would entail moving the remains again, this time to the President James K. Polk Home and Museum in Columbia, TN.  Polk’s father built the Columbia house in 1816, and the future president lived there until his marriage in 1824.  The site’s curator says the move would accord with Polk’s desire to be buried at home, since the Columbia museum is his only residence still standing (other than the White House).  Joey Hensley, a state senator who supports the reinterment, has also argued that the current tomb is too easy to overlook.

The relocation is one step closer to happening, since the state senate has given its approval.  But both houses of the General Assembly, the state historical commission, and the courts have to agree before anybody starts digging, and the state historian thinks it’s a bad idea.

Personally, I think the sensible thing to do is leave the grave where it is.  In his will, Polk didn’t request burial “at home,” but specifically at Polk Place.  Since Polk Place itself is gone, fulfilling that request to the letter isn’t possible, but the State Capitol is just a short walk from where the house stood.  It seems as appropriate a spot as any, especially since it’s a place of honor at the seat of the state government.  That’s just my take.

The other Polk news item is the publication of another volume of his papers by the fine folks at UT’s James K. Polk Project.  This new volume includes valuable material on the end of the Mexican War and the consequent U.S. territorial gains, one of the most important developments of Polk’s presidency.