Is the historical blogosphere doomed to peter out?

A couple of years ago I took a grad course from a very tech-savvy professor.  A classmate asked him about setting up a blog for purposes of professional visibility.  The prof was dismissive.  “The whole blogging thing has pretty much run its course,” he said.  “Everything’s moving to Twitter.”

For my own part, I’ve become much, much more active on Twitter than here on the blog in the past couple of years.  We’re still chugging along here at PitP, but between a full-time gig running a museum and trying to write a dissertation, I’m doing well to crank out a post every week or ten days.  And just as I don’t have much time to write blog posts, I don’t have much time to read them, either.  I used to make a daily circuit of history blogs, checking in with my favorite writers every morning or during a lunch break, keeping up with whatever conversations were current.

On those rare occasions when I’m able to make my electronic rounds, it seems a lot of history bloggers are having the same problem I am.  Many of the sites I used to frequent have been dormant for months, especially the Civil War ones.  Civil War Memory is still going strong, but some of the old standards have apparently given up the ghost.  With so many folks blogging less frequently or ceasing to blog altogether, the sense of community across the historical blogosphere—of a conversation among like-minded folks—isn’t what it used to be.

Part of the problem is that most historians already have to do a lot of unpaid writing.  For a lot of them, blogging doesn’t even bring in the sort of professional, non-financial rewards they get from all this other uncompensated writing.  If you start something that requires time but brings in neither money nor professional cred, there’s a good chance it’ll be the first thing to fall by the wayside when you’re stretched too thin.

Personally, I’d hate to see the historical blogosphere dry up entirely.  I think there are itches that only a forum like this could scratch—discussions about the intersections between history and pop culture, informed but informal discussions about historic sites and museums, updates on preservation advocacy, and so on.  Those itches are still there, and I think it’s worthwhile for historians and history enthusiasts to address them.

Archivist job opportunity at the Abraham Lincoln Library and Museum

We’re looking for an archivist and librarian to join our team at one of the nation’s best repositories of Lincoln and Civil War material.  If you’ve got a master’s degree in library science; a background in archival work with manuscripts, photos, prints, and rare books and pamphlets; and an interest in nineteenth-century American history, then click here for more information.  I’d especially encourage those of you with knowledge of PastPerfect software and experience in digitization to apply.

And if you’re in the public history or archival field, please feel free to share this opening as widely as possible.

GDP: A couple of Carolina dinosaurs

Well, it was supposed to be a working trip—no prehistoric shenanigans allowed.  But it turns out the North Carolina Museum of Natural Sciences is practically right across the street from the state archives.  I took it as a sign.

A most welcome sign, too, because the NCMNS has two dinosaur specimens I’d wanted to see in person for a long time.  The first is “Willo,” a remarkable Thescelosaurus from South Dakota.

This guy (gal?) was all over the news back in 2000 due to a claim that the stony mass under the shoulder blade was actually a petrified heart.  Other researchers have argued that it’s just a concretion.  Either way, Willo is a really neat fossil.

The other dino I wanted to check out was the world’s largest and most complete Acrocanthosaurus, a massive Early Cretaceous meat-eater famous for the spines along its neck and back. 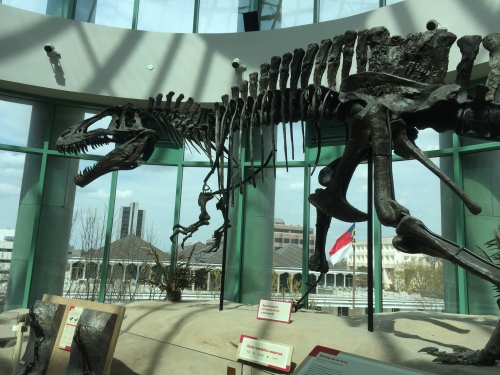 Note that some of the bones are missing.  I think the museum is replacing the original fossils in the mount with replicas because of the preservation conditions in the exhibit space, so if you want to see the genuine article, you’d better do it sooner rather than later.

The original skull is in a case nearby, and it’s a beauty.

The acro shares its gallery with an Astrodon.  Those wicked teeth have already ripped a chunk out of the sauropod’s hindquarters, and it looks like the acro is going to make another lunge.

The dinos alone were well worth the stroll over from the archives, but this ginormous ground sloth is one of the most impressive fossil mammals I’ve ever seen. 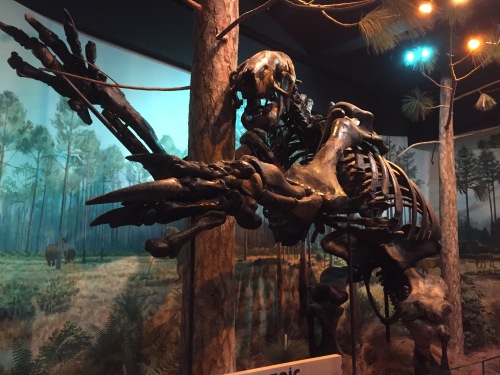 Even more ginormous are the whale skeletons looming over the Coastal North Carolina exhibit.  My faves were the blue whale… 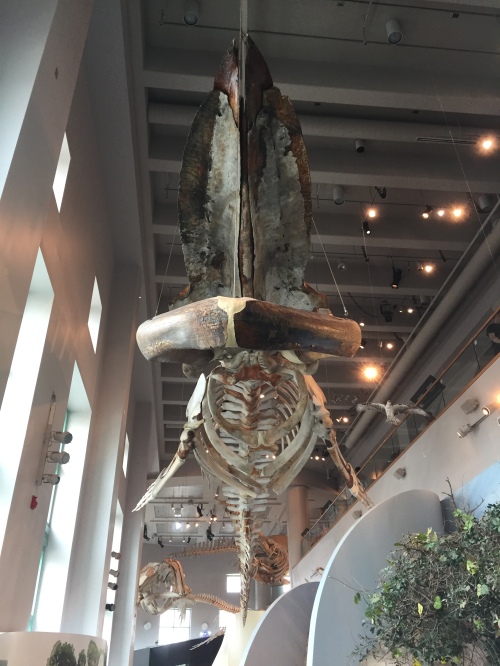 …and “Trouble,” the skeleton of a sperm whale that washed up on the Carolina coast in 1928.  The name came from the ordeal museum personnel had getting the bones back to Raleigh.

Last stand of the Regulators

Alamance Battleground had been on my bucket list for many years, so I stopped by for a visit on my way back from a research trip a couple of weeks ago.  It’s a small site, but its story is very important to the history of the eighteenth-century backcountry

Settlers in the North Carolina uplands had a great deal to be upset about in the years leading up to the American Revolution.  Underrepresented in the provincial legislature, they were also subject to exorbitant taxation and fees by corrupt local officials who were, in the words of Richard Beeman, “as feckless, venal, and larcenous a lot as existed anywhere in America.”  Exasperated backcountry farmers—”Regulators,” as they called themselves—responded by breaking up courts and engaging in some of the same resistance tactics that seaboard colonists were employing against British taxation.

The revolt came to a head at Adamance, where a force of approximately 2,000 armed Regulators faced off against just over 1,000 militiamen under the command of Gov. William Tryon on May 16, 1771.

Here’s a view from near the Regulator lines, facing toward the position taken by Tryon’s men. 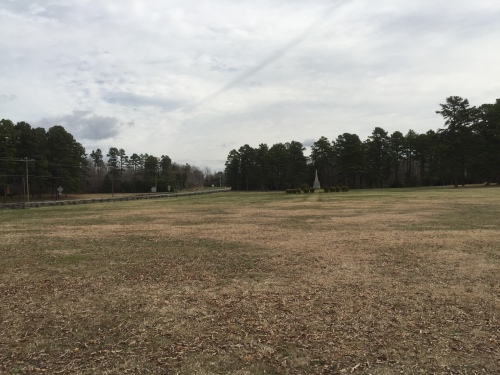 And here’s another, this time facing the Regulators’ position from the opposite side of the field. 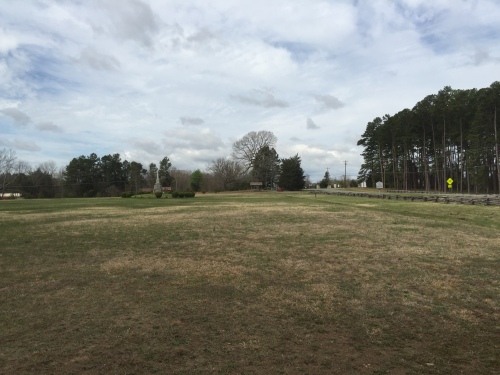 After trading volleys with Tryon’s militia, the Regulators broke.  At least nine men died on each side (Tryon’s losses may have been higher).  The governor hanged one prisoner in his camp nearby; six more went to the gallows in Hillsborough the following month.  One of the condemned men appears on the plaque affixed to this monument, which was originally placed at the Guilford Courthouse battlefield in 1901 and moved to Alamance in 1962.

The fact that a monument to the Regulators’ defeat once sat on North Carolina’s largest Revolutionary War battlefield is significant.  Early chroniclers referred to Alamance as the “first battle of the American Revolution,” with determined farmers standing up to a tyrannical government headed by a royal appointee.  This monument, dedicated in 1880, identifies the combatants at Adamance as “THE BRITISH AND THE REGULATORS,” although the men in Tryon’s ranks were the Regulators’ fellow colonists.

The actual relationship between the Regulators and the Revolution was more complicated.  The rebels had indeed defied a royal governor.  But a good part of the blame for their predicament lay with the eastern Carolinians who dominated the colonial legislature and kept backcountry concerns marginalized in provincial politics.  And it was just such men who, calling themselves Patriots, led the protest movement against imperial taxation.  When the Revolutionary War broke out and these easterners looked westward for support, many backcountry citizens were still nursing grievances from the Regulator dispute.  The same thing happened in South Carolina, which underwent a separate Regulator movement in the 1760s.

The Regulation wasn’t a dress rehearsal for the Revolution.  Instead, it made the Whigs’ task of mobilizing the backcountry more difficult when war with Britain came.  As a result, both Carolinas went into that war divided, and British armies would find some of their most zealous supporters among the backcountry colonists that seaboard Patriots had antagonized.