Opportunity to help save critical battlefield ground in the Carolinas

Every visit I’ve made to Guilford Courthouse has been a little bittersweet. I’m always delighted to be there and enjoy the National Park Service’s superb interpretation, but also upset at how much of the ground around the park has been smothered by development.

That’s why this opportunity from the American Battlefield Trust comes as such good news.  It’s a chance to turn back the development clock at Guilford while also securing land at the small but significant battleground of Hanging Rock in South Carolina:

At Hanging Rock, generous battlefield preservationists like you have already secured 141 acres. These 30 acres in the part of the battlefield where the initial Patriot attack began will add significantly to the land we have saved there already.

At Guilford Courthouse, the half-acre tract at stake may be small, but it’s part of a larger strategy to deal with the modern development crowding in on this battlefield from all points of the compass. Our plan is to buy up plots of battlefield land – including small ones and those with non-historic structures on them like this one – remove all non-historic structures and restore the battlefield. The Guilford Courthouse National Military Park has generously agreed to take responsibility for demolishing and removing the house on this plot, a considerable cost that we would typically need to cover.

Best of all, matching fund opportunities will allow us to buy these 31 acres for less than a fifth of their full value! That’s right, we have a $5.20-to-$1 matching opportunity to buy these $475,000-worth of Revolutionary history for just $91,250.

Click here and pitch in as much as you can.

The Gen. Nathanael Greene Homestead in Coventry, RI has to shell out a couple thousand dollars for a security camera setup because of jackasses who dump their trash there.

It’s happened twice in two months.  And we’re not talking a little bit of trash, either.  It’s like truckloads of construction and landscaping debris.

The story you want to cover vs. the artifacts you have

Glenn David Brasher paid a visit to the newly opened American Civil War Museum in Richmond.  His review is mostly positive, with a notable caveat:

But here is the main problem: the museum is making great effort to tell a more inclusive and diverse narrative of the war, and the written interpretation does so. But the artifacts they have now are just not yet helping them tell that story.

Yes, you won’t find many Civil War museums with an audio and visual presentation telling the story of an enslaved girl that was brutally whipped for allegedly poisoning her owner, or that displays slave shackles, or that interprets the post-war years by featuring a Reconstruction era KKK hood and garment.

The African American story, as well as the Union story, are both featured throughout the exhibits. There is also homefront and gendered history, but with few exceptions (like the ones just mentioned) the artifacts packed behind the glass cases are overwhelmingly the treasures from the old Museum of the Confederacy.

The battles themselves get shunted away to high tech electronic video boards that visitors can interact with, which is fine, I’d rather see visitors get out to the battlefields themselves if that is what they are looking for. But theoretically that means the museum should be focused on social and cultural history, and most of the interpretation is, but yet the most attention-grabbing relics are largely battle-related accouterment from southern soldiers and officers.

I assume this dissonance between narrative and artifacts is due to the nature of the ACWM’s collection, much of which probably consists of militaria from the Museum of the Confederacy.  When an institution’s collection has been accumulating for decades, it takes time for the acquisitions to catch up with changes in academic or interpretive trends.

We’re actually wrestling with similar dilemmas at the Abraham Lincoln Library and Museum.  We’re getting ready to break ground on our big expansion and renovation project, which will in turn enable us to make further changes to our permanent galleries.  The biggest of these will be a new exhibit on Lincoln’s presidency.  One of the themes we feel compelled to explore in this exhibit is the transformative nature of that presidency—how Lincoln’s use of presidential power changed the office, the nature of the Civil War, and the nation.

Like most museum collections, ours has its particular strengths and weaknesses, and not all of our strengths play to the content we want to include in the new exhibit.  For example, we’ve got a lot of great artifacts from, say, the election of 1860 and Lincoln’s funeral, but precious little we could use to trace Lincoln’s evolving position on emancipation from spring 1861 to summer 1862.  (I mean, we’ve got a ton of popular prints and cartoons illustrating American responses to the Emancipation Proclamation, but not much that shows Lincoln’s internal reasoning for changing a war for the Union as it was into a war for a new birth of freedom.)

Of course, we’ve got ideas to meet these challenges.  After all, figuring out creative ways to convey historical information through exhibits is part of the job.  But when we finally raise the curtain on our new permanent exhibit, there will inevitably be an imbalance in the number of artifacts per narrative section.

It’s a bit frustrating, since building narratives out of objects is what museums do—or at least it’s the thing they do that other for of communication don’t.  But this is a dilemma that I think museums professionals are going to deal with more and more.  Expectations for more well-rounded and inclusive narratives will continue to grow, and older institutions will continue to transform from showplaces for relics into places that more fully reflect the breadth of their respective disciplines. 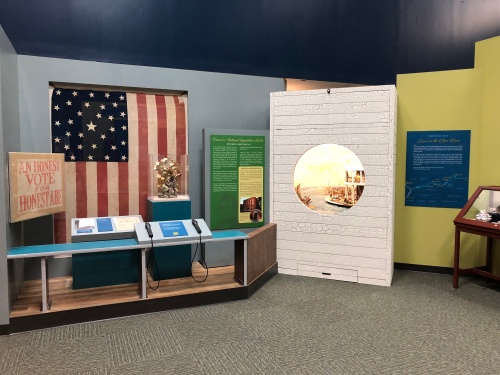 David Library of the American Revolution is moving to new quarters

The David Library of the American Revolution — a treasure trove of Early American history set within the scenic splendor of Washington Crossing — will move next year from Upper Makefield to a new home at the American Philosophical Society in Philadelphia, where the priceless collection of documents and books are expected to attract the attention of researchers worldwide.

Founded by Benjamin Franklin in 1743, the APS is the “oldest learned society in the United States.” The David Library’s collection will be housed in a new David Center within the society’s library at 105 S. 5th St. The APS draws 130,000 visitors a year to view its vast collection of books and manuscripts, including Franklin’s papers.

It’s located near both the new Museum of the American Revolution and the National Constitution Center, providing researchers and tourists an easy walk between these sites and nearby Independence Hall.

“This will now be the one-stop shop for the Revolution,” said Patrick K. Spero, librarian and director of the American Philosophical Society who studied at the David Library. “It will create a powerhouse, a center for the study of the Revolution that is unmatched.”

The library is expected to remain in Washington Crossing until the end of this year. The library’s board of directors will then determine the “next life” for the 118-acre property located at 1201 River Road in Upper Makefield. The property is zoned country residential and has an agricultural preservation easement.

A one-stop shop for both the APS and DLAR collections is a pretty awesome prospect.  As a former DLAR research fellow, though, I’ll miss the library’s old grounds at Washington Crossing.  The month I spent there was the most enjoyable (and fruitful) period of archival work I’ve ever done.  Indeed, it was about as close to the perfect research experience as one could get: living in a lovely house right next door to the library, twenty-four-hour access to an outstanding collection of books and microfilm, my own personal workstation and scanner, the assistance of a dedicated reference staff, and all of it right in the middle of some of the most important Rev War sites in the country.

If you’re not already doing so, I encourage you to support the David Library financially.  I can’t think of a better way to invest in the future of American Revolution scholarship.