We lost one of America’s finest historians this year.

Some time ago word went around on Twitter that Charles Royster had passed away, but I didn’t see anything official until somebody passed along this obit from the AHA.  Royster was Boyd Professor of History at Louisiana State University.

He completed his Ph.D. at Berkeley under Robert Middlekauff, writing a monumental dissertation—monumental both in its importance and its size—on the Continental Army.  The dissertation became the basis of his book A Revolutionary People at War: The Continental Army and American Character, 1775-1783, which won the Francis Parkman Prize, the National Historical Society Book Prize, and the Fraunces Tavern Museum Book Award. That volume alone would have been sufficient to establish him as one of the premier scholars of American history, but his Civil War study The Destructive War: William Tecumseh Sherman, Stonewall Jackson, and the Americans was just as acclaimed as his first book, winning both the Bancroft Prize and the Lincoln Prize.  He was also the author of Light-Horse Harry Lee and the Legacy of the American Revolution and The Fabulous History of the Dismal Swamp Company: A History of George Washington’s Times.

I first encountered Royster’s work when I was fresh out of college.  At that time I was a newly-minted aspiring historian who had decided to study the American Revolution.  On a family trip to Williamsburg I found a copy of A Revolutionary People at War in a bookstore.  It probably had a bigger impact on me than any academic book I’ve read, whether at that time or since.  It was one of my first experiences with a work of history that asked such probing questions and constructed such meaningful answers.

Sometimes, when you’re just beginning to engage with a field, a book will smash its way into your intellect like an asteroid, but then you revisit it later when you’re more seasoned and find the magic’s worn off.  You decide it must have made a big impression only because you read it when you were green and had a narrow frame of reference.  That’s never been the case with me and A Revolutionary People.  Every time I take it off the shelf, it’s as powerful and insightful as it seemed before I started graduate school.  To this day, I think it’s an unparalleled analysis of the Continental Army and its role in defining what the Revolution meant.

The SMH devoted a panel to A Revolutionary People at the first academic history conference I ever attended.  I heard Royster himself would be there, and brought my copy to ask if he’d sign it.  Unfortunately, he didn’t make it.  I regret that I never got to meet him and thank him for his body of work.  But that body of work remains.  I’m sure people will be turning to it for as long as there’s an interest in the American past.

Getting patriotic with Historians at the Movies

Those of you who are hip to Twitter might already be familiar with Historians at the Movies.  If you’re not, here’s how it works: A bunch of history folks crank up the same Netflix offering at the same time, and then tweet along using the hashtag #HATM.  The brainchild of Jason Herbert, it’s become quite the phenomenon.

People have been clamoring for HATM to take on The Patriot, and this Sunday night it’s finally happening.  You’ll want to start the movie at 8:30, but the Twitter commentary usually gets going closer to 8:00.

I’ll be one of many tweeting along, using my professional-ish account @mlynchhist, which I reserve for subjects historical and museological.   Anytime there’s an excuse to talk Southern Campaign stuff, I’m all in.

I just read (and enjoyed) Captives of Liberty: Prisoners of War and the Politics of Vengeance in the American Revolution by T. Cole Jones.  Like Holger Hoock’s Scars of Independence, Jones’s book challenges the popular view of the Revolution as a restrained, limited war waged according to high-minded ideals.  While prominent Revolutionaries did indeed envision a humane, restrained war, reports of the mistreatment of American prisoners and British atrocities (whether exaggerated or not) led many Patriots to embrace a more vindictive war of retribution.  This had profound and very unfortunate effects for British and Tory prisoners who fell into American hands.

We usually associate the idea of a vindictive, retributive war with the Revolutionary South, and especially the southern backcountry.  After the British invasion of South Carolina in 1780, Whigs and Tories engaged in an eye-for-an-eye struggle marked by lynchings, denial of quarter, and other bloody acts of retaliation fueled by a desire for revenge.

Many writers tend to treat this internecine conflict in the backcountry South as an exceptionally nasty deviation from the war as a whole.  Jones interprets it differently.  “While not denying the violence of the southern campaigns,” he writes, “viewing the treatment of enemy prisoners in the South within the context of prior British and American practice reveals more continuity than disjuncture.  Through this lens, the war in the South emerges not as a drastic departure from a limited European-style conflict but as the intense culmination of a process of escalating violence that had begun in the summer of 1776” (p. 189).

Nor were southerners and backcountry settlers the only Americans to mete out impromptu, retributive violence against Tories.  “Southern militias were not alone in their practice of terrorizing, torturing, and executing loyalists; northern revolutionaries committed similar acts of vengeance,” Jones writes.  “Wherever British forces could project enough power to support loyalist resistance, revolutionary militias and crowds responded with terror and violence” (p. 207).

The work of Jones and Hoock suggests that we need to rethink the ways we write about the Revolution in the South.  Maybe it’s time for us to stop asking why the southern experience of the Revolution was so violent and start asking ourselves whether there was really anything exceptional about it.  And perhaps the selective nature of American memory about the Revolution’s ferocity illustrates the ways we use regionalization to compartmentalize the past’s unsavory aspects. 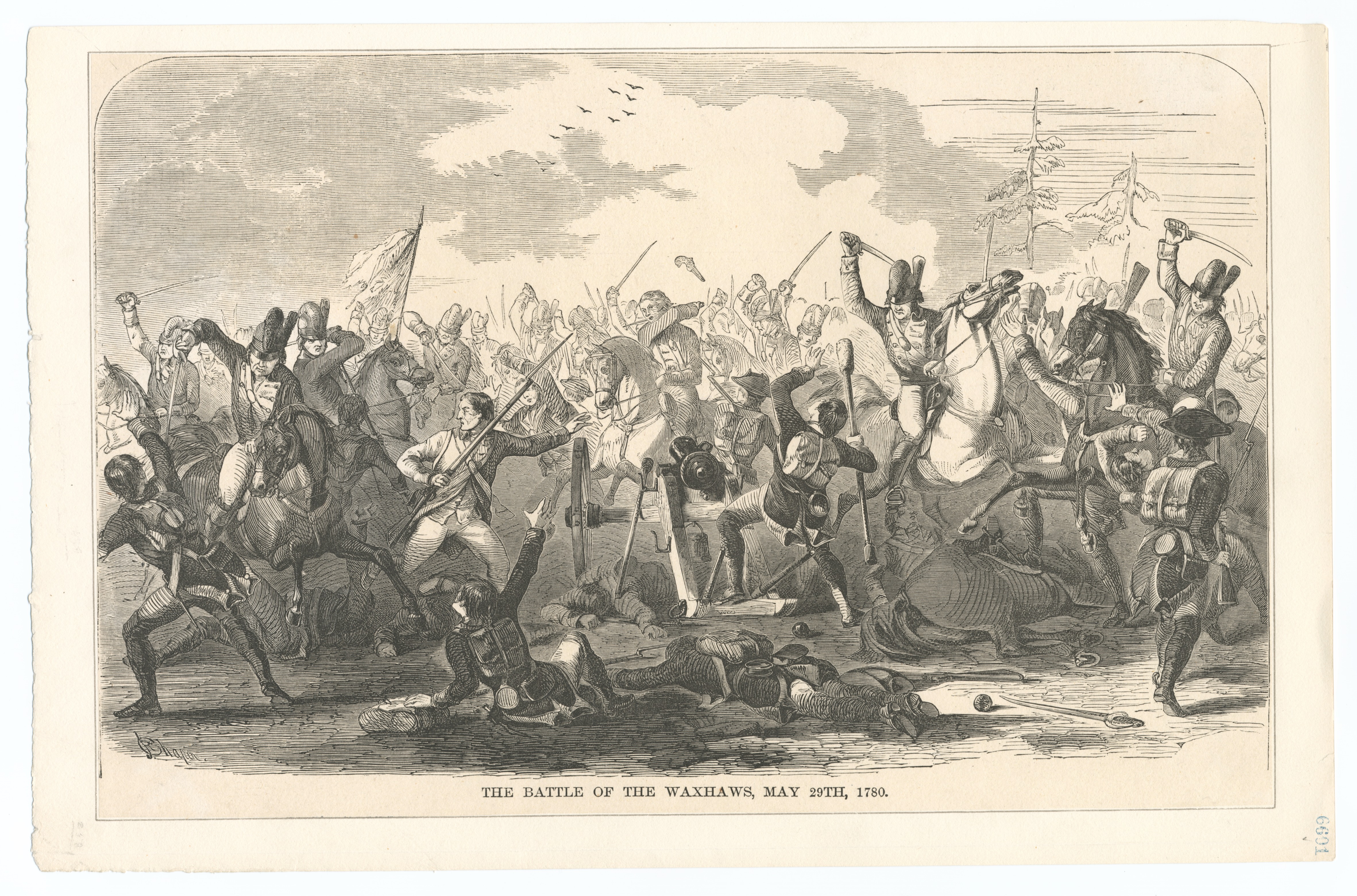 The Battle of Waxhaws, from the New York Public Library via Wikimedia Commons

The DCAR’s new web address is https://www.amphilsoc.org/david-center-american-revolution, so update your bookmarks.

King’s Mountain movie in the works

Well, folks, we’ve been doing what-ifs on this for years, and now it looks like somebody’s taking a crack at it.  From WBTV:

NORTH CAROLINA (Théoden Janes/Charlotte Observer) – The most noteworthy film credits he’s got to his name are producing and co-starring in a low-budget faith-based movie titled “Only God Can” and a small role as a character named John Rock in a practically-no-budget comedy titled “Cinema Purgatorio.”

She, meanwhile, is a Charlotte consultant who works with a few private equity firms and has no prior experience in the film industry.

Yet the startup filmmaking team of John Oliver (no, not the HBO talk show host; this John Oliver primarily makes his living as a voice actor) and Stacy Anderson says they are extremely close to beginning production on an ambitious new movie project that features a screenplay by a New York Times bestselling author and is set to be directed by an established Hollywood name.

And the thing they’re most excited about? “Revolutionary!” — which is the movie’s working title — has the Carolinas written all over it.

It’s to be set not far from Charlotte: Based on the Battle of Kings Mountain, the story centers on a ragtag band of militias backing the patriot cause that surprised and overwhelmed British-loyalist forces near the N.C.-S.C. line on Oct. 7, 1780, marking the first of a string of significant American victories that changed the course of the Revolutionary War in the South.

I haven’t read anything by Patrick Davis, the guy doing the screenplay, but it looks like his oeuvre consists of military thrillers.  Director Nick Searcy‘s got a whole slew of acting credits.

The good news is, they’ve already got NPS historians on board.  And it’s fitting that the people behind this have Carolina backgrounds and want to shoot the whole movie in the Old North State.  Regional, state, and sectional concerns have galvanized efforts to commemorate and write about King’s Mountain for well over a century.  This is partly because people hailing from regions associated with the battle and the men who fought it have been foremost in perpetuating its legacy.  That’s what I’ve argued some of my own research into historical interpretations of King’s Mountain.

Anyway, it’ll be interesting to see how this progresses.  Wonder if they’ll go with my suggestion and cast James McAvoy as Ferguson?

Oscar and Catherine Gilbert’s Bloody Ban: Banastre Tarleton and the American Revolution, 1776-1783 is on the way from Savas Beatie.  The Gilberts’ work on backcountry militia in the Revolutionary South has been good, so this one ought to be well worth a place on the shelf.  It’ll be interesting to compare their conclusions with those of Anthony Scotti, whose Tarleton study appeared in 2008.

Military history buffs should be quite familiar with Savas Beatie.  In fact, independent publishers like SB and Westholme have been putting out some of the most interesting Rev War and Civil War books of the last few years—fresh takes on important campaigns, new light on neglected events and theaters, and reconsiderations of prominent figures.

East Tennessee artist Mary Ruden‘s statue of Mary Patton is on display at Sycamore Shoals State Park until the end of this month.

Patton and her husband operated a powder mill in the Watauga settlements.  Most accounts credit her with outfitting the King’s Mountain expedition.  Sycamore Shoals is an especially appropriate venue for this sculpture, since two of Patton’s big powder kettles are on exhibit there.

This is one of a series of Ruden’s works depicting historic Tennessee women. Her next subject is suffragist Lizzie Crozier French, just in time for the centennial of the Nineteenth Amendment.