A Smithsonian smorgasbord of awesome objects

I used one of my free afternoons in Washington to take a whirlwind tour of the National Museum of American History.  I hadn’t been inside since the renovations that wrapped up in 2008.  I like the changes; the new halls are much more open and inviting, and easier to navigate.

But as I’ve said before, what I’m really after when I visit the NMAH isn’t so much interpretation as the chance to stand in the presence of iconic “superstar” objects—the things the Smithsonian has because it’s, y’know, the Smithsonian.

And hoo boy, does the NMAH have them in spades, especially in the exhibition The Price of Freedom: Americans at War.  From the French and Indian War through the War on Terror, it’s nothing less than a comprehensive military history of the United States in exhibit form, bristling with incredible artifacts.  One of them—Gen. John Pershing’s WWI desk—is right outside the exhibit entrance.

I was mostly drawn to the Rev War stuff, of course.  Hessians of the Ansbach-Bayreuth Regiment surrendered this flag at Yorktown. 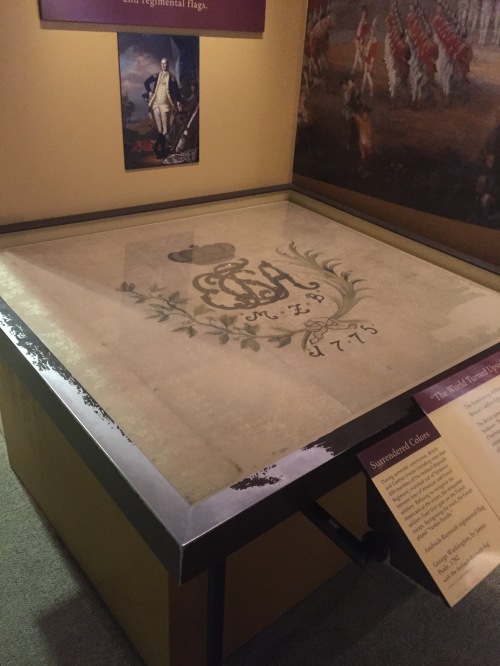 Perhaps the most awe-inspiring pieces in the exhibit are personal items worn or used by George Washington: epaulets, sword, camp stool and chest, and 1789 uniform.

While we’re on the subject of generals and their apparel, here’s the uniform coat Andrew Jackson wore at the Battle of New Orleans…

…and William Sherman’s hat, along with the sword he carried at Shiloh. 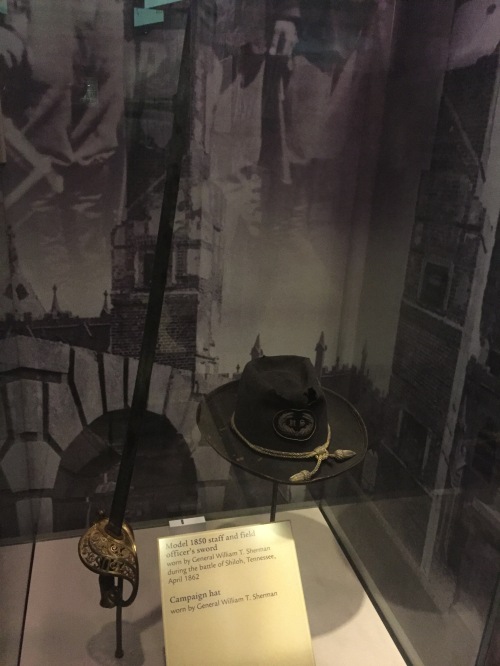 If you visit the McLean House at Appomattox today, the chairs inside the parlor are reproductions.  Here are the originals, in which Grant and Lee sat to hash out the end of the Army of Northern Virginia.

If you’re going to be a frontier officer, you might as well dress like a frontiersman.  Here’s George Armstrong Custer’s buckskin coat.

And we haven’t even gotten to the twentieth century yet.  You could easily spend an entire day in the Price of Freedom exhibit—and if you can’t visit yourself, you can check out the artifacts online—but there are treasures on every floor of the NMAH.  Some of the most remarkable are in American Democracy: A Great Leap of Faith, which boasts the portable desk Thomas Jefferson used to write the Declaration of Independence… 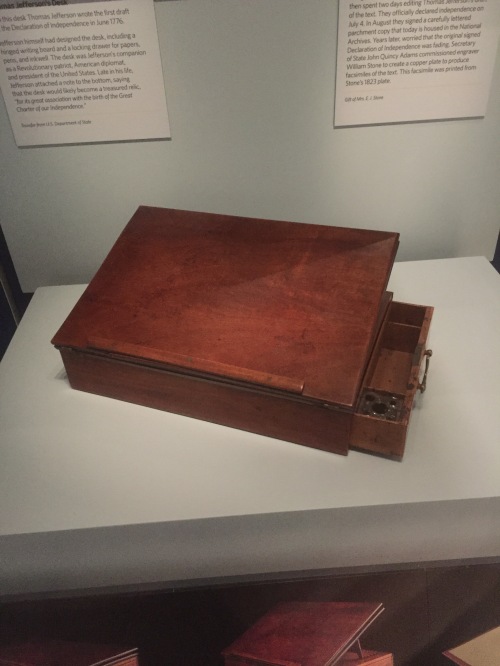 …and the box Washington used to store papers from the Constitutional Convention.

Here’s an object with a Tennessee connection.  Davy Crockett received this ceremonial hatchet from a group of admirers in 1835.

Some of the coolest objects are in the NMAH’s maritime exhibit On the Water.  Here’s some ammo recovered from the wreck of Blackbeard’s ship.

I’ve mentioned my interest in the history of whaling before, so I was delighted to find a section of the maritime exhibit devoted to it.  Here’s one of the basic tools of the trade.  Once this harpoon’s toggle head sank into a whale’s flesh, the rear prong sprang outward, holding the blade fast.  Think of it: Men climbed into small boats and used these things to wage close-quarter battles to the death against sixty-foot leviathans on the open sea.

The twisted iron below, wrung out of shape by a diving whale, is mute evidence of how fierce these contests could be.  That thing gave me chills.  It brings to mind Ahab’s remark about Moby Dick bearing harpoons “all twisted and wrenched in him.”  You can also see some of the improvements in the whalers’ arsenal that became more common in the late nineteenth century.  The harpoon gun and the exploding harpoon head, patented by Sven Foyd in 1870, allowed whalers to take down even the largest and fastest species. 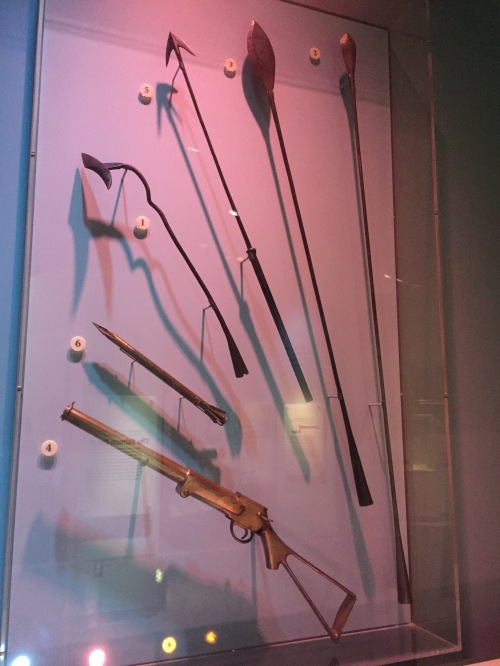 A whaleboat outfitted for the chase:

With their prey dead, the whalers towed the carcass back to the ship and lashed it alongside.  Some men donned “monkey belts” like the one below to hang over the vessel’s side, where they stripped the blubber to render it into oil.  It was messy, dangerous work. 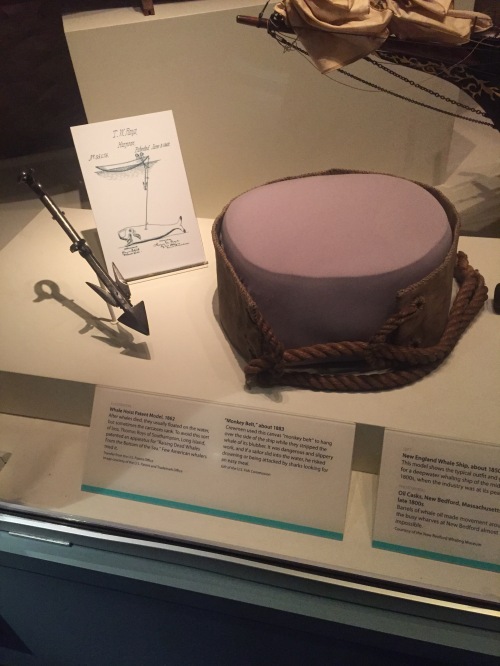 Chopping blades hacked the strips of blubber into “Bible leaves,” while skimmers and forks were indispensable tools around the boiling vats.

At the end of the day, of course, whaling was a business.  Ships’ logs recorded the number of barrels of oil obtained from each kill.

Whaling voyages were long; many ships stayed at sea for years at a time.  Scrimshaw carvings in teeth and bone helped sailors pass the time. 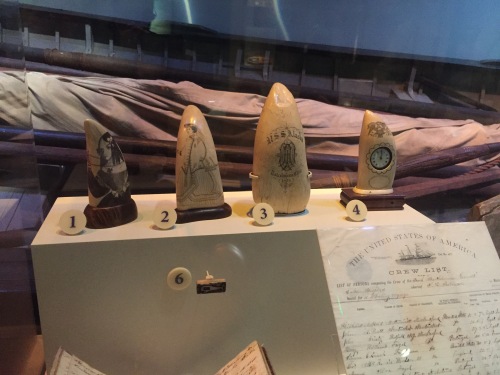 The NMAH also has an extensive collection of objects related to mass media and pop culture, but as a serious history professional, I wasn’t about to sully my intellect wi—HOLY CRAP, IS THAT THE BATMOBILE!?

Indeed it is, and it’ll be parked at the Smithsonian for three years.  And maybe it’s as appropriate an object as any for wrapping up a visit to NMAH.

The latest issue of Smithsonian has a pretty interesting article on Blackbeard’s last hurrah in colonial North Carolina, with a look at some of the new evidence that’s come to light in the past few years.