If you were planning to watch some reenactors do their thing at Minute Man National Historical Park this year, you’re out of luck.

I think I was even more psyched about visiting Lexington and Concord than doing the Freedom Trail.  It’s a must-see for anybody interested in the Revolution, and Paul Revere’s Ride was one of the first books I read after I switched my major to history in college.

Minute Man National Historical Park holds much of the important real estate involved in the Revolution’s first fight, although Lexington Common is town property and therefore outside the park’s bounds. 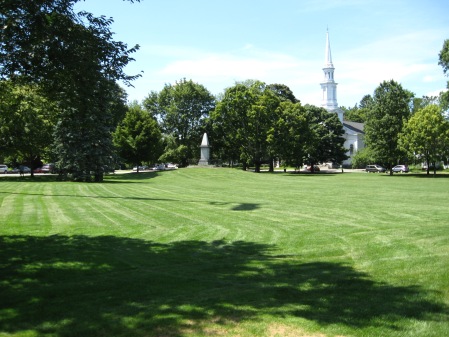 The common is probably the most well-groomed battlefield I’ve ever visited, and for one of the most important pieces of turf in the world, it’s also relatively unadorned.  Just a few monuments, including the “Revolutionary Monument” set up in 1799…

a rock inscribed with Capt. John Parker’s instructions to his men…

…and the iconic statue of a militiaman. 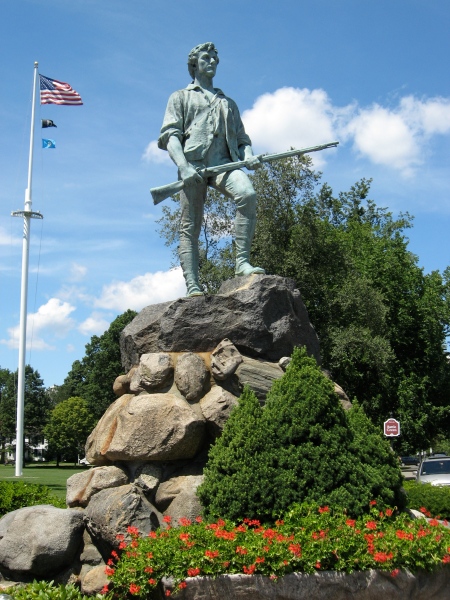 The Lexington Historical Society operates three historic buildings in the town as museums.  We took a tour of Buckman Tavern, which is right beside the green.  In the wee hours of the morning on April 19, 1775 the town’s minutemen awaited the arrival of the British here.  It’s one of the best historic building tours I’ve ever enjoyed; the tavern is beautifully restored, and our guide was outstanding.

Heading west from Lexington brings you to Minute Man Visitor Center near the eastern entrance to MMNHP.  Here you’ll find a small exhibit on some of the battle’s participants and an innovative multimedia presentation that gives you a great overview of the Revolutionary War’s beginnings.  It’s similar to some of the shows at the Abraham Lincoln Library and Museum in Springfield, and very engaging.

This is one of those parks you can see in a few hours or a lifetime, depending on how much time and interest you have.  I should note that MMNHP also boasts a couple of really important literary sites, including a home owned by both Louisa May Alcott’s family and Nathaniel Hawthorne as well as another home inhabited by Hawthorne and Ralph Waldo Emerson.  The NPS was renovating one of these buildings and the other closed before we arrived, but we hadn’t really planned on touring them, so no big deal.  (I wanted to maximize my time at the Rev War sites anyway, and I’ve always thought the Transcendentalists were a bunch of insufferably self-righteous navel-gazers.)

There’s a five-mile trail tracing part of the route of the running battle between the militia and the British regulars with stops at a few key points, like the Revere capture site.

The park has another visitor center near Concord’s North Bridge.  Among the artifacts displayed here is “the Hancock,” one of the cannons stashed away in Concord that the British hoped to recover on their ill-fated mission.

A short walk downhill from the visitor center is the most famous bridge in American military history this side of Antietam—or a replicated version, anyway.  (The town of Concord dismantled the original North Bridge in 1793.)

There are three monuments worth noting near the bridge.  Emerson’s famous Concord Hymn was written for the dedication of the first one, an obelisk erected in 1836. 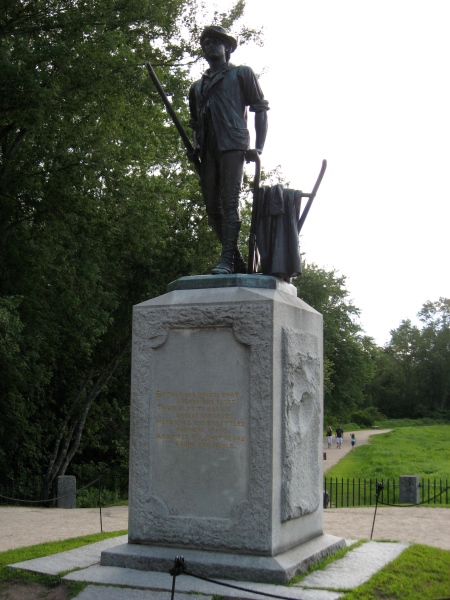 Finally—and the most impressive one to me—is the grave marker for two of the British soldiers killed at the bridge fight. 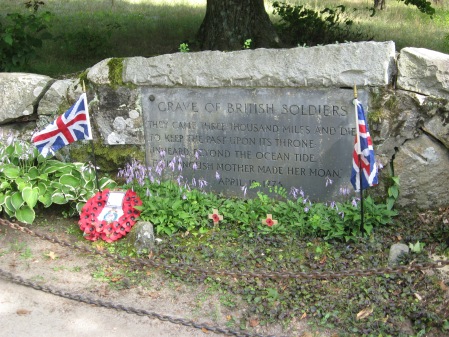 Last time we looked at some of the interpretive techniques the folks at King’s Mountain National Military Park are using in their visitor center exhibit.  Today let’s examine one of the tools they’re using out on the battleground itself.

The  basic building block of King’s Mountain interpretation, like that of many battlefields, is the trailside sign.  Anybody who’s visited a historic site is probably familiar with these things.  Each sign has text describing what happened at that particular sector of the field, some images, maybe a first-person quote or two, and an orientation map.

Not too long ago, a new type of sign appeared along the trail at King’s Mountain.  I first encountered them during a visit this past summer, and they were still there on my last trip a few days ago.  Each one marks a stop on a cell phone audio tour.  You just dial the number on the sign, press the key for that particular stop, and listen to the narration.

These audio clips are a little lengthier than the narrative excerpts written on the trailside signage, which makes sense, because most people will be more likely to listen while standing or walking than they will be to stand there and read a lengthy block of text.  As I mentioned last time, “exhibit fatigue” is a real problem with long passages of text in galleries.  Many visitors will get bored with the narrative and just browse at whatever pace and in whatever order suits them, which means the interpretive scheme and storyline will fall apart.  An audio tour can incorporate more verbal information because visitors will passively receive it.  It also has the advantage of including visually-impaired visitors into the experience.

Of course, audio tours at museums and sites are nothing new in and of themselves.  What I find innovative about this particular application is that it utilizes a tool that visitors already have on hand.  Since so many people carry cell phones these days, King’s Mountain can implement the advantages of an audio tour without the inconvenience and expense of distributing a bulky personal audio player with headphones to each guest, or setting up playback devices across the battlefield.  It’s also unobtrusive with respect to the landscape, because all you need is a small sign.

The times they are a-changing, and historic sites are rolling with it.